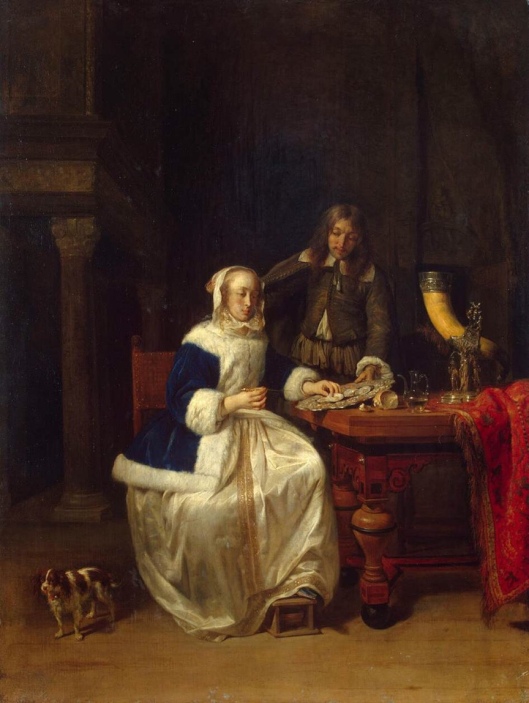 Here we have a much more sombre and almost depressing scene, where even the dog turns away disgruntled, painted by Gabriël Metsu (1629-1667). The man standing seems almost forcing with his right arm the seated female to take one of the oysters on the plate he is offering her. She appears to hesitate, a knife is poised gently between her right thumb and index finger ready to extract the oyster from its side shell, possibly. Her downward look, as if she is staring into nothingness, and stiff appearance are hardly signifying any pleasure, more a moment of torment. Perhaps she simply hates oysters! The light of the painting makes the pearl whiteness of her satin dress, sumptuously reproduced with its shades and folds, and fur of her coat quite radiant, and illuminates her vulnerability and meekness even further. Her left foot rests precariously on the edge of a footwarmer that had the function of warming up the legs and undergarments of the woman, often seen in paintings of brothels and prostitutes.

Bearing in mind the idea of oysters being regarded as a trading commodity, it might be that she is aware of being procured or under the duress of some obligation. Nor is her suitor smiling, but he seems rather to be goading her into submission. To his left on the elegantly carved table is placed a large drinking horn that could be interpreted as having some phallic connotation but seems rather out-of-place in this dampened atmosphere, though perhaps its presence is a reminder of what the scene’s intentions are. On the other hand, it has been identified as the drinking horn of the Guild of St. Sebastian, or longbow militia (as he was considered the patron saint of archers). Whether this has any connection with the male in the painting or the lady of the house or even to the situation at hand is, as is expected, very difficult to ascertain. The horn had been painted in an earlier, still-life painting by Willem Kalf in 1653. The leg of the table has been bared as the thick rug of a tablecloth has been pushed aside to make way for the drink and oysters.

All the ingredients for a seduction seem to have fallen into place, except for the apparent reticence of the young, morose woman. However, the knife does present another possible solution and it is as though she could be toying with quite a different idea to resolve this situation in which she does not appear comfortable. The lack of joy, sensuality, or desire affects the dull reflection of the oysters as well. In the State Hermitage Museum and in other contexts, the painting is more prosaically entitled The Breakfast, thus denying any connotation or link with oysters and their intent. It is feasible that this painting reflected the more strict codes of social and courting behaviour that was stringently followed in some circles, and possibly its depressing air might have served as a comment on such customs.

However, the tension in the painting is undeniable between the offer of the oyster, together with certain sexually charged symbols, on the one hand, and the numb despondency emanating from her appearance and gaze, on the other. Kettering (1997) has tried to give a more gender-specific perspective on certain genre paintings, especially those that highlight the radiance of female satin dresses. Her example is a painting by ter Borch but can be equally applied in this context. She sees the shiny surface of these sumptuous gowns as a surrogate for the female body, thus elevating the status of the fabric “to the status of fetish” (1997, 103). At the same time the dress obscures and protects the body from intrusion, thus rendering the female more chaste and virtuous. Possibly Metsu is implicitly recognising the right of the female to deny the male his pleasure and not yield to male pressure and the social norm of the male courting the female.

Kettering sees the narrative of these paintings as one of the female resisting “servitude to Venus”, whilst also maintaining a decorous reserve as a model of restraint, and self-control. This pose of the female gives her paradoxically the upper-hand over the male as she becomes idealised and the centre of attraction in a male-dominated society that puts the unreachable female on a pedestal (ibid., 113). But also she is standing up for her right as a female to protect her femininity and herself from male possession. In this light the oyster threatens to jeopardise the equilibrium of this social stereotype, as if it were a foreign body about to soil the decorum of these sedate surroundings. Indeed, there is a subversive element attached to the oyster not only in these domestic interiors, far away from the capricious sea, but also in the courtship ritual that followed certain rules and procedures.

Franits, W. (1993): Wily women? On sexual imagery in Dutch art of the seventeenth century. In: From Revolt to Riches: Culture and History in the Low Countries 1500-1700, eds. Theo Hermans and Reinier Salverda. London, UCL Press, 2017.