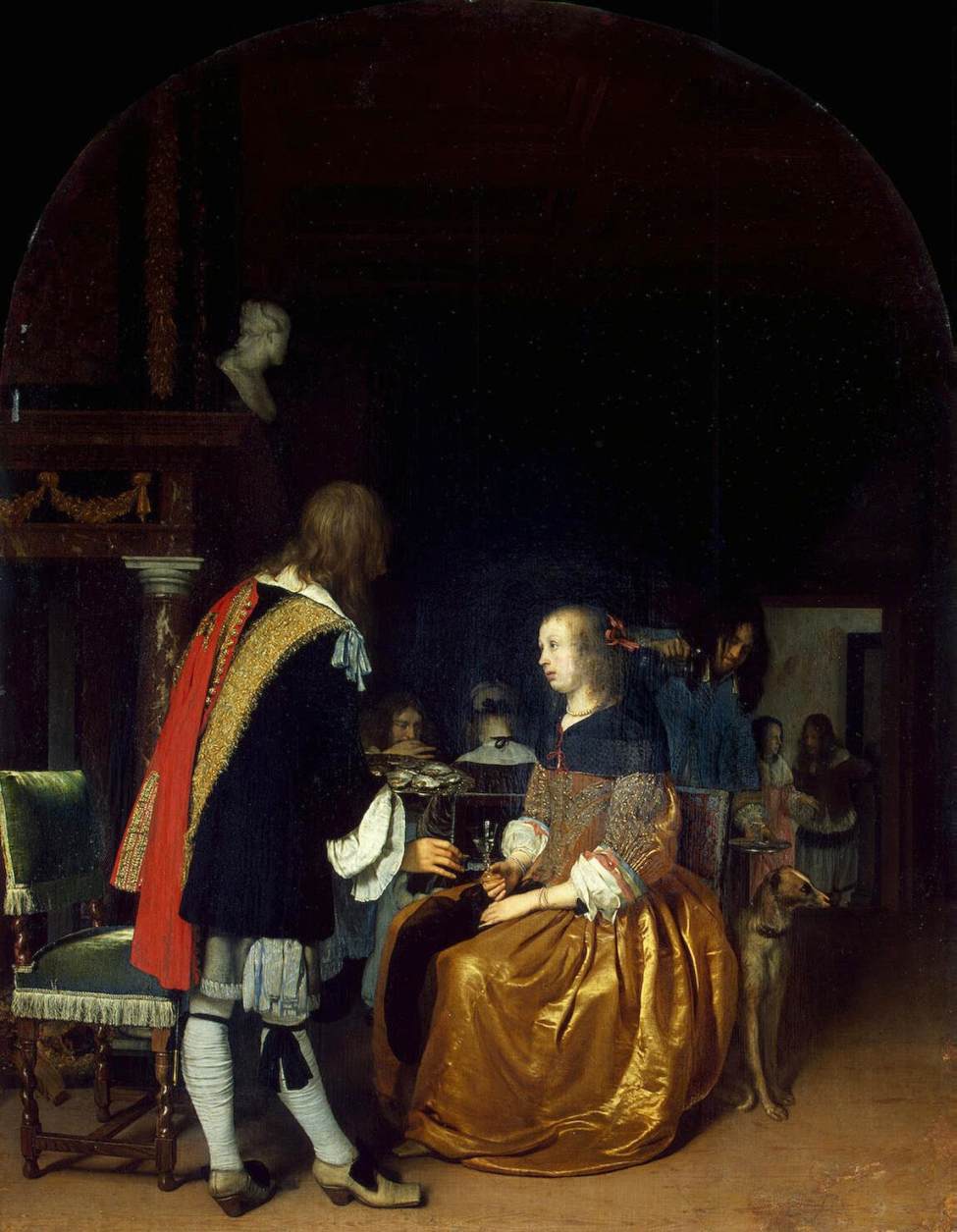 In this painting by Van Mieris, a finely dressed young man has his back turned towards the viewer whilst offering a seated young woman, whose face is in pale profile, a plate laden with oysters. Her eyes are concentrated on his face, as if she is listening intently to something he is telling her. Her right hand is holding the base of a wine glass, whilst her left hand is resting comfortably on her knee. However, her facial expression is one more of puzzlement than rapture, which adds to the intensity but also ambiguity of the situation. She is wearing a tight pearl necklace and bracelets on both wrists, while the bodice and sleeves of her dress are studded with small pearls as well. The forefront of the painting shows a refined interior and the garments of both figures reveal a certain sophistication and taste, so exquisitely rendered by the way the artist brings out the sheen of the woman’s long silk dress.

Behind the two figures, the rest of the interior is darkened, where five other people are placed. Perhaps the two on the right at the back are curious servants keeping an eye on proceedings. Her dog waits patiently, if not disinterestedly, behind her chair, whilst a dishevelled man pours a glass of wine for someone. The young man’s stance is a little more earnest and dazzling, even charming, although his face is completely hidden. It is rather the pale face of the girl that commands the focal point of the light of the painting, despite her somewhat frozen pose. In their interaction there is a delicate and tender quality that the light also conveys – her quizzical facial expression and resting left hand, his right hand and position of his right shoe. Between the two young people and directly above the plate of oysters a man’s face can be discerned, feeding himself with something, an oyster it would seem, almost as if he is eating from the plate offered to the young woman.

The passivity of the girl is spatially juxtaposed to the male pleasure in eating. Wheelock ventures to state that Mieris “sought to exploit the emotional power of open-ended narratives in domestic genre scenes” ( 2017, 218), whilst Buvelot in the same catalogue is so impressed “how compellingly Van Mieris could portray the interaction between men and women” (ibid., 169).  The painting manages to draw a fine line between the poise and propriety of this well-heeled couple, and the more visceral and devouring pleasure gained from the oyster meal itself. On the surface it would seem pretty obvious that this is a scene of courtship, rather than seduction, where the man is offering the woman the delicacy of oysters as a veiled invite to signify his amorous interest. The poses of the couple are more static, refined and composed, exaggerated somewhat by the painter only offering the viewer of the suitor’s back. The presence of ambiguity and the outward innocence of the young woman may offer another line of interpretation that the oyster is bridging the delicate gap between male desire and female innocence and eases or nourishes the transition between the two. In this sense, the oyster could be seen as not only an aphrodisiac but also as food for an initiation rite de passage and future enjoyment.

Buvelot, Q. and Wheelock, A.: In Vermeer and the masters of genre painting, ed A. Waiboer. London: Yale University Press, 2017.